Let’s play a game. I hand you a diaper with a brownish smear in the center. I tell you that the smear is baby food and ask you to smell it. That’s right, just stick your nose up close to the brown goo and take a deep whiff. What do you think will happen?

I can tell you from experience that some people actually gag — a full-bodied retch. And yes, the smear really is baby food, such as mashed spinach or pureed lamb. This activity was a guessing game we played at my daughter’s 12th birthday party, challenging her young guests to identify various baby foods by their smell.

What’s going on in the brain when you sniff mashed carrots and somehow smell baby poo? It’s called simulation. Your brain draws on its past experience (i.e., with dirty diapers) to construct your experience in the present, simulating a familiar and expected stench.

Simulation can also be visual. The famous optical illusion below, called the Kanizsa square, does not have a white square in the middle, just four black shapes. Your brain is drawing on its past experience with squares and other rectangular objects to construct lines where none exist. It’s simulating a square. 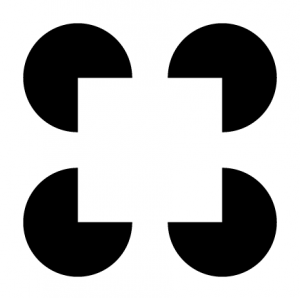 Scientifically speaking, simulation means that some neurons in your brain are causing sensory neurons to fire, in the absence of sensory input. When you look at the picture above, neurons are firing in your visual cortex to simulate a white square when none is present. During our diaper game, neurons in those 12-year-old brains were simulating olfactory (smell) input in the total absence of baby poo.

Simulation is not just a party trick, however. It’s the way your brain works all the time. You might think that information from the world simply flows to your brain via your five senses, but that’s not how the brain works. Rather, it predicts and simulates everything that’s likely to happen in the next moment, and it uses your five senses merely to confirm or deny the predictions. In other words, your everyday experiences of sights, sounds, smells, and so on, are simulations that are constrained by the world. This process is so fast and automatic that it’s not usually detectable, except in specially-designed situations such as viewing the Kanizsa square (or sniffing a food-filled diaper). Forward-looking thinkers speculate that simulation is a common mechanism not only for perception but also for understanding language, feeling empathy, remembering, imagining, dreaming, and many other psychological phenomena.

Simulation also creates your emotions. I explain the details in my book, How Emotions are Made: The Secret Life of the Brain. In a nutshell, simulation is the default mode for all mental activity, and emotions are no different in this regard. Emotions are simulations that your brain constructs, in the moment, as it makes meaning of sensations from inside your body and the outside world.

My daughter’s disgusting birthday party not only provides an intuitive example of simulation, but also it was a big hit with the kids. We served an equally gross lunch, including white grape juice in medical urine sample cups, and “vomit Jell-O” with little bits of vegetable suspended in it. Some of the kids refused to eat or drink as they involuntarily simulated all sorts of vile smells and tastes. Who says science can’t be fun?